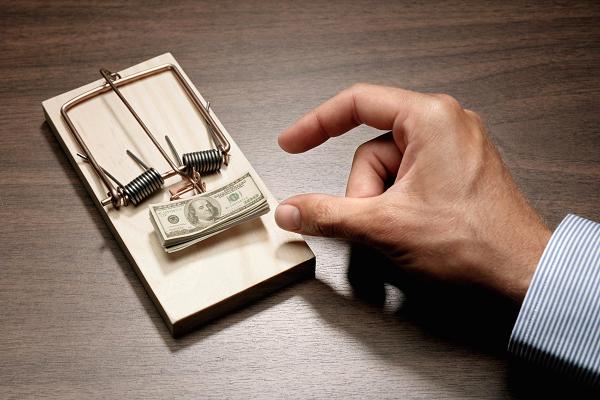 The micro-cap stock market (ie: penny stocks) has a long history of fraud, yet it attracts new investors every day.

The dream of owning the next Microsoft, Yahoo, or eBay at the start-up stage and riding it to easy riches is enough to make even a skeptic’s greed glands salivate.

The other allure of micro-cap stocks is the false feeling of big time investing that comes from buying more shares with less money.

Many inexperienced investors prefer 100,000 shares of dubious value over ten shares of real value. They love the idea that a single penny change in the price can double their wealth. Exciting stuff … sort of.

Unfortunately, there are two fundamental problems with penny stocks that make them ripe for securities fraud.

The two most common forms of securities fraud in penny stocks are “pump and dump” and “bogus offerings”.

The general rule for penny stock investing is to avoid it unless you’re an investor with specialized expertise in the business.

“You may be deceived if you trust too much, but you’ll live in torment if you don’t trust enough.”– Frank Crane

Prime bank fraud is designed to attract conspiracy theorists who believe the Rockefeller’s, Rothschild’s, Saudi Royalty, and other members of the privileged class have secret access to highly lucrative investments that a mere commoner like you and I can’t normally invest in.

Triple digit returns may be promised for becoming a “privileged investor” with access to the world’s elite bank portfolios: “prime banks”.

The only problem is prime bank securities don’t exist.

Neither do other related forms of this type of fraud which include “standby letters of credit,” “revolving credit guarantees,” and other legitimate-sounding euphemisms for fictitious high yielding debt.

Avoid all forms of unconventional, high-yielding debt issued through non-verifiable sources. Be particularly cautious when the investment includes nonsense about being given access to something normally reserved for the privileged few.

Bull markets are often associated with a permissive social culture that can lead to brazen investment business practices resulting in institutionalized securities fraud.

Few investors take notice of lapses in integrity as long as everyone is making money and the markets continue to rise. When the punch bowl is removed, then the hangover that follows can reveal institutionalized securities fraud.

You wouldn’t trust medical advice from your doctor if he was biased by sales commission kickbacks from drug companies, so why would you make the same mistake with your investment advice?

Unfortunately, many investors aren’t even aware of the biases inherent in the investment advice they receive.

“Honesty: the most important thing in life. Unless you really know how to fake it, you’ll never make it.”– Bernard Rosenberg

For example, Merrill Lynch settled with the New York Attorney General’s office for $100 million for this misleading practice (without admitting any wrongdoing, of course). Other big name brokerage firms ran into similar conflict of interest charges.

The fundamental problem causing institutional securities fraud is the greed and easy-money character of major bull markets that can result in a promiscuous business culture.

In the search to maximize bottom line profits, there’s always the risk that one bad apple will place expediency in front of integrity, resulting in fraud.

Just because an institution is large and reputable doesn’t make securities fraud impossible.

Independent agents are the perfect sales outlet because they’ve already earned your trust, but lack sophisticated compliance departments and due diligence procedures to uncover illegitimate investments.

The result is a trusted expert who actually knows little more than you about sorting fraud from legitimate investments.

Be wary if your agent offers high returns with little or no risk on viatical contracts, brokered CD’s, equipment leases, factoring, promissory notes, or other unconventional investments.

Just because you trust your independent insurance agent or accountant for the professional services they regularly provide doesn’t necessarily qualify them as an investment expert.

Always be careful of who you trust. Licensed professionals unknowingly recommend illegitimate investments

Affinity group fraud is another example of mistaken trust. Investment fraudsters will exploit their victim’s age, religious, ethnic, sexual, or professional identity to gain your confidence knowing that it’s human nature to trust people who are like you.

Affinity fraud bypasses the natural distrust we have for schemes promoted by strangers.

The lure to invest is the supposed profits that will somehow benefit the church or professional organization that you want to support.

“We have to distrust each other. It’s our only defense against betrayal.”– Tennessee Williams

For example, a respected church leader is sold an investment. The scam artist then informs this leader that if church members also purchase the investment, then profits can benefit the church or its favorite charity.

The con man bypasses the usual distrust he experiences by using the affinity of the group.

Senior fraud is a specialized form of affinity fraud. Seniors are natural fraud targets because they’ve accumulated significant assets from a lifetime of saving and investing.

In addition, their age gives them a common set of interests and concerns for fraud promoters to exploit through affinity.

This is an unfortunate combination of circumstances that makes this group a prime target for investment fraud.

In addition, your broker may have recommended investments unsuitable for your particular needs.

For the complete story on what to look out for, see the article in our investment fraud series titled “Stock Broker Fraud”.

Also, beware of trusted professionals selling investment products that aren’t their ordinary field of expertise (such as insurance salespeople or accountants promoting investments).

The objective of this fraud is to steal the advance fees you pay to participate in some larger objective.

For example, you might be asked to make a series of upfront payments for a bargain shipment of heating oil, coal, or some other commodity that ultimately never arrives.

Alternatively, you might be offered an interest-free loan from an off-shore bank if you pay an application fee in advance.

Regardless of the service or product promised, the formula is for you to pay an entrance fee now for something you’re supposed to receive later – but never arrives. The fee paid is the scam artist’s profit.

Certain legal investments cross the boundary into securities fraud when they’re sold to the wrong person without adequate disclosure.

The most common investment in this category is variable annuities because of their costly surrender charges, steep commissions, and high expense structures.

For the complete story on variable annuity investment fraud see the related article “Variable Annuities Explained – What You Must Know”.

Similarly, callable CD’s are higher yielding, longer-term certificates of deposit that can be redeemed by the issuing bank. The problem with these securities is the potentially high penalty fee for early withdrawal if the investor needs liquidity.

The long-term nature and high surrender charges make them inappropriate for investors needing current access to their money.

Viatical settlements were originally created to help seriously ill people pay medical bills by selling the death benefit from their life insurance policy to an investor for immediate cash.

There’s nothing illegal about viatical settlements, but when they’re misrepresented, they can become a type of securities fraud.

For example, the health condition of the seller could be falsified or even improve over time, thus impairing the return on investment.

Alternatively, the insurance could be invalid due to fraudulent applications, or there could be no actual insurance or greatly reduced benefits making the investment essentially worthless.

Viatical settlements are complicated investments requiring specialized due diligence skills. They’re not for the inexperienced.